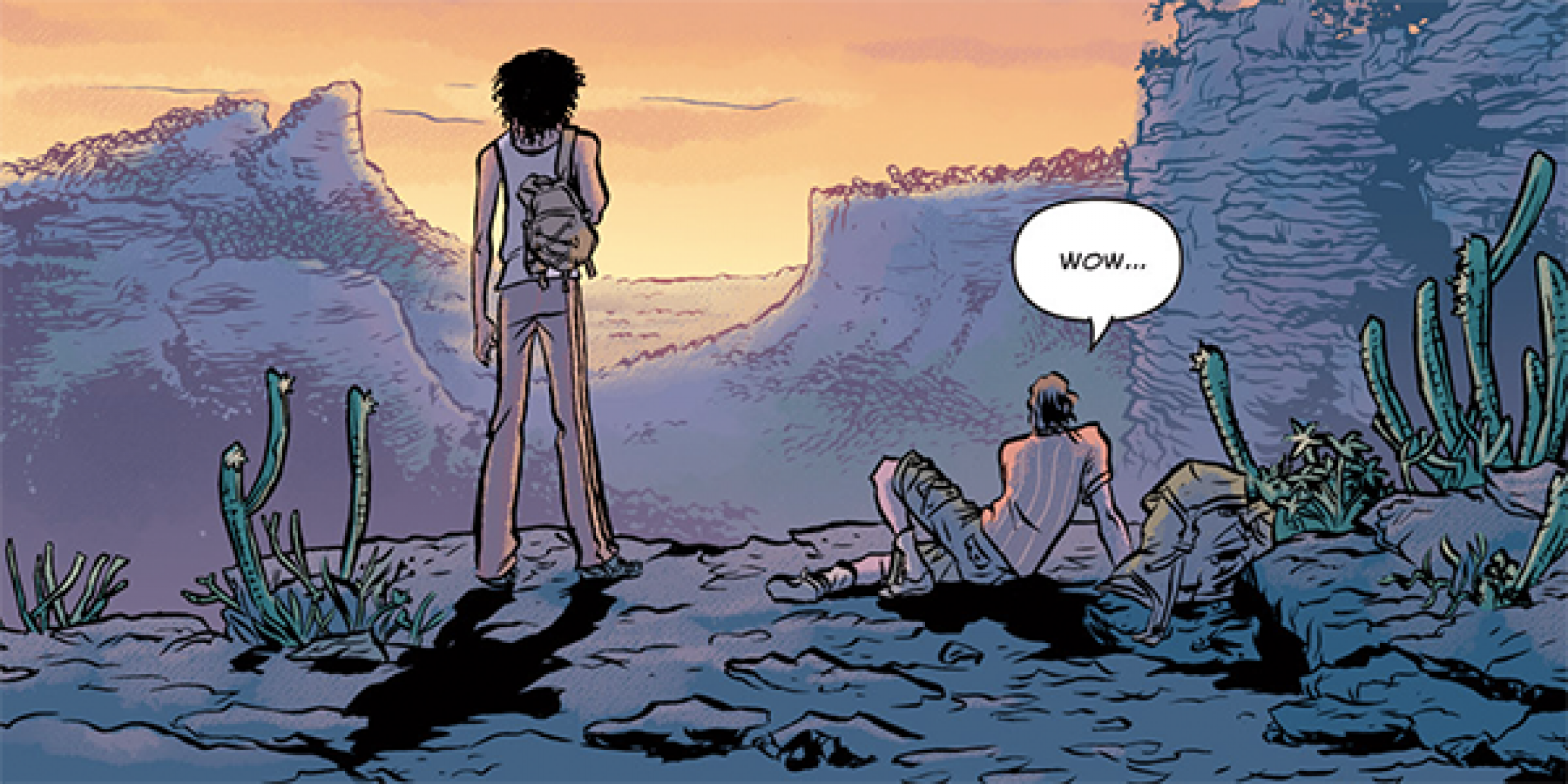 This is a combination of one of the most famous photos of all time, Earthrise by NASA, and a soccer ball image I pulled from Target’s website. I knew very quickly that I wanted to use this specific space photo. I have been a huge space geek for years, and this photo has been my background/profile picture on many different devices and accounts. What I spent most of my time on was deciding on what spherical object to replace the Earth with. My first idea was to make some “deep” and “original” message by imposing a spherical ball of trash, but that felt really basic. I have played soccer for the past 16 years of my life however, so it didn’t take me too long.

The process of editing was very simple. Actually too simple. Once I put the image in place I decided to add some shadow to the ball. But even then it still felt kinda off and too unnatural and easy, so I made the image slightly translucent which let some Earth texture in. Even though it’s not exactly following the assignment, it made the image much more pleasant to look at.

What I’m realizing now is that this assignment was too easy. There was too much freedom and too many options. I didn’t really like that though. My main frustration was trying to come up with something original among the generic and unlimited ideas easily accessible from the toolbox of the internet. Nevertheless… I made something. I can’t say I’m proud of it, but I can at least say I’m glad I didn’t settle for the most basic version…

Once I knew what this week’s assignment was, I knew immediately I was going to draw my Astrobiology notes. It almost seems like too easy and cliche of an answer, but I genuinely did not fully understand what was going on in Astrobiology (in terms of types of planet migration and different theories on how solar systems work) until I sat myself down and drew it out. Part of that was due to the fact that I had to actually look up stuff I was confused about. Once I had to plan out the drawing I put a lot more effort into making sure I had an accurate understanding of what I needed to draw. I couldn’t just copy down what was on the board and not think about it until it was time for the test. I had to actually apply my knowledge of the material.

Once I finished it I realized that there was a lot of empty space. I still do not feel like I used the paper to its fullest. I didn’t want to crowd things, but, especially in the top right corner, now that I’m looking at the whole thing it feels very spaced out.

I had the idea for the Coca Cola one a week ago. I think I was intrigued by the concept of playing with perspective and I wanted a dynamic image with perspective of the face and the Coke flowing in mid-air. I ended up doing a “mock-up” of my idea last week which is what you see here.

When I sat down to do my “real” version of the image something just didn’t feel right. I wanted to try something different. I didn’t like how the red Coca Cola bottle popped out so much from the black and white drawing. First I grabbed for a charging cord. Then when I got my mechanical pencil out of my pencil bag I saw all of my other pencils and pens just sitting there, practically asking to be used. My natural instinct went straight to drawing an eye. I actually have a long history of drawing hundreds of eyes over the years, slowly booming more and more realistic. They are my favorite thing to draw and I love exploring different styles, so this seemed like a natural experiment for me to take. Once that idea took hold it couldn’t be stopped. I quickly walked around to my hall mates and borrowed most of the blue pens and mechanicals that you see there. I was a little rushed with putting together the whole image because I had to leave to pick my brother up from the airport, but overall I’m happy with the experiment in style.

The initial splurges of thoughts definitely helped my mind organize what I was attracted to in reading: immersion into another world. I came up with four different beginnings to my piece until I landed on one that I felt had the experience of immersion most accurately described without directly saying it.

The essay was a lot harder to write than I thought it would be. Once I got going on an idea though the words practically jumped their way out of my mind and onto the screen. I found it easiest to go chronologically through what I remember of reading. I was definitely surprised at how most of my memories of reading boiled down to five main books/series: Harry Potter, Percy Jackson, Bone, Redwall, and Warriors.

” I don’t remember the specific moment it happened, nor do I quite know why, but at some point in the latter half of my junior year at high school I felt a yearning for something familiar. Among my thoughts of schoolwork and becoming an adult, a desire to travel back to the moments of childlike freedom snuck into my daily consciousness. This craving led me back to my bookshelf, and, over the course of several months, I traveled back to the worlds of Harry Potter, Percy Jackson, Redwall, and –most fondly– Bone.” – Me (Isaac Gazmararian)

A quick note on the visual aid: the drawing is supposed to be my experience reading Harry Potter, as I’m transporting into the pages of the book to the grounds of Hogwarts.

While writing the essay I was forced to strike an overarching structure to my reading and my thoughts about reading. And now that I’m done with it, all I want to do now is read another book… and get lost in another world.

My avatar is a shot from one of my favorite films, Eternal Sunshine of the Spotless Mind (written by Charlie Kaufman), with a text overlay of the nickname “Gaz” as some refer to me as. For the record, you are welcome to call me Isaac OR Gaz. I will respond to either. “Gaz” is a shortened name my grandfather, other, and brother used in school from our last name “Gazmararian.”

The process of designing an avatar was surprisingly hard for me. I knew it would include something related to film, as that is a big passion of mine, but I struggled picking any specific film because I love so many of them. Initially, I worked on combining an image of the black hole from the film Interstellar with the image from the film City of God, as both films are two of my favorite movies, are from completely different genres, and relate to my other passion for space. However, I struggled with the layout of the images and how to best overlay/crossfade them, which eventually led me to simplify my design and settle on the image from Eternal Sunshine.

For those who don’t know, Eternal Sunshine of the Spotless Mind is a film about a two people who decide to erase all memories of the other from their own minds after they break up. The film flows in and out of reality and memories as events bleed into each other and the protagonist (played by Jim Carrey) questions whether or not he wants to finish the memory-wiping procedure. While the story seems fantastical, the film hits on some ruthlessly real emotions. It deals with the breaking down of the idealization of a romantic partner, how people change in relationships, how all-consuming romantic relationships can be, and much much more. I love the film for its realistic portrayal of human emotions which can’t be cleanly categorized. There are only two films in my life that have helped me through romantic break-ups, the movie Her by Spike Jonze and Eternal Sunshine. Both films share a certain level of humility and vulnerability that I find lacking in other “romantic” films. The film also has beautiful cinematography, which smoothly moves the viewer through memories (sometimes in one shot!). That type of lucid cinematography is something I have learned from and attempt to apply it to my own short films. The film is also written by my favorite writer of all time, Charlie Kaufman (writer of Adaptation, Being John Malkovich, Synecdoche, New York, Anamolisa, etc.), who consistently crafts wholly unique films with an odd sense of structure, pacing, and character which I cannot find nowhere else. Kaufman’s films almost feel like a character itself.

Suffice to say that this film has impacted me many ways, as a person, a cinematographer, and a writer. There are few out there like it. I initially chose to slant the text because I thought it would look cool, but now the more I think about it, I like how it almost feels like the name “Gaz” is laying down next to Clementine and Joel, as if I am part of the film.

“Blessed are the forgetful: for they get the better even of their blunders.” – Mary Svevo, Eternal Sunshine of the Spotless MindFriedrich Nietzsche