I decided to make a comic about my band in high school. I chose some of highlight photos of a band I was in during high school. I decided to make a comic about this because I was talking to a few of the guys recently and we agreed this was the best time of high school. For the composition of the piece, I decided to choose chronological pictures of our performances. The first picture is from sophomore year homecoming, the next is junior year homecoming, a charity event we played at, and our senior prom. I thought that making the triptych was easier because the middle is just one page instead of two but it still felt natural with two in the quadriptych.

When I first saw the assignment prompt, I couldn’t come up with any story to tell. Overwhelmed with my midterms, I was always hastily running between the library and my dorm, having no chance of slowing down a bit to see what was happening around. Today, two high school friends of mine sent some fall scene pictures (the first two panels credited to them) in our group chat and I was shocked by how leaves in other cities had already turned red. So on my way to class today, I deliberately observed the fall scene in Atlanta. At first, I was very excited to find some fallen maple leaves on the ground and I thought to myself “The fall had really come!” However, as I turned and looked around, I saw green trees just like in the summertime. Disappointed? A little bit, since I never get to see leaves turning red in my city. I was expecting a “redder” fall scene here. Plus, I finally realized how far away my friends are from me through such comparison.

I think the composition process was actually very similar to that of the triptych since both are telling a story with a clear structure. When crafting my quadriptych, I think the contrast between the fall scenes can be somewhat funny because the first three panels create an illusion that the final panel is going to follow the trend, but it doesn’t. Having two panels for the middle act instead of one allows me to provide more information for the readers. Here I was able to include images from two different cities other than Atlanta rather than just one so that the comparison is made stronger. 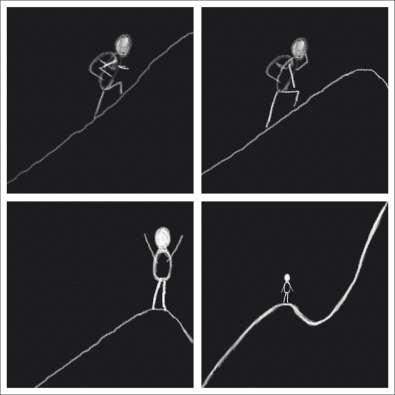 The middle of a semester is always a struggle. One thing that I always do to comfort myself is to say that everything will be good as long as I survive this week. And I will say this every week during that period.

One day, there was this epiphany that I had been doing this not just every week, but every month, every year, and every stage of my life. Life is like climbing a mountain, and there will be small plains after steep ascents, but it will never be the top. It seems that I have been stuck in this recursion. Still, I keep climbing.

For this assignment I was inspired by an idea my roommate, Emily, gave me to make a comic about how I always sleep through my alarms and miss the whole day. At first I tried to used creative commons photos, but couldn’t find anything that fit exactly what I wanted, so I then resorted to drawing. I spent a lot of time on this assignment because of its artistic involvement. For portraying my inability to wake up in particular, I felt having four panels was useful because the repetition in the first three adds to the humor the fourth panel when I finally wake up. I found this process harder than the triptych because it was hard knowing how much action I needed to have in my panels. The main purpose of telling this narrative was for humor, although I do think it is informative about me since my chronic low blood pressure leads me to always sleep too long.


Is it too mean? I don’t know, but I felt like ever other idea I had was over the top or offensive in some way. After a couple hours agonizing over finding a joke that I actually thought was funny yet tame, I decided to just follow my instinct and let whatever happens happen. That being said, This week’s Sunday Sketch was a toughie. The idea was the toughest part for me, the execution was simple. Of course I don’t really feel this way about grandmas. The prompt was to write a joke but I feel like that warranted being said regardless.

After hand drawing my triptych, I knew that for this Sunday sketch of a quadriptych, I wanted to make it out of photos. I thought it would be interesting to see how the challenge of story telling changes from hand drawn images to photos. I searched my phone trying to find four consecutive images that told a story. I found two solid candidates, and eventually settled on the one you see below. This set of four pictures shows my two cousins while we were all on vacation. My cousins and I are basically like siblings, we see each other all the time and are super close. In this moment, their mom wanted to take a picture of them, and at first they didn’t want to, however came around in the end.

After finishing this assignment I took a look at my triptych and tried to compare it to my quadtriptych. In my personal opinion, I found it a lot easier to make and understand the story when it was hand drawn. The stories for both though were very interesting, as my triptych was fiction, while the photos I chose were from a real event that I had a memory of. As a result, I was able to tell the story of what was happening during the four photos.

Initially when I started working on this assignment I had no idea where to begin. After seeing the example posted on the assignment page, I decided to make a comic that was houmorous and fall-related. Shortly after searching for puns I came across the phrase “I’m hollow inside” on Elite Daily. This inspired me to create the comic pictured above. I found a comic with a therapist sitting across from a baby and replaced the baby with a pumpkin. I also added multiple frames in order to create more of a shock and to avoid all-at-onceness.

This week’s sketch was a comic that had to stretch across 4 panels which made me anxious because I have never been exposed to writing a comic. When I was trying to come up with my idea for my topic I knew I wanted to talk about an incident last week in which my teacher cancelled class and I showed up to class in a frantic run thinking that I was late. This style of comic felt different because the triptych had a clear beginning, middle, and ending section while the quadriptych had to have a 2 panel middle section. Having the middle act stretch across 2 panels allowed me to add more elements to my comic and have it run in a more fluid fashion. I told a comedic story because I needed a break from being serious and philosophical in my posts.

Link back to assignment is here: https://eng181f19.davidmorgen.org/assignments/sketches/sketch-10-quadriptych/

For this comic, I had a really hard time trying to come up with something to draw. Compared to the triptych comic we did two weeks ago, this felt like it took a lot more time to brainstorm. I think this was because I wasn’t very confident in my drawing ability and I didn’t want to draw something that didn’t make sense. It felt weird having to have a story arch that had to stretch across four panels rather than one. Eventually, I decided to do the origami swan because it was easy for me to draw and I thought it had a comical storyline because it seems so simple to fold a swan but in reality it’s really hard.

This composition process was actually very difficult. This is because I wanted to challenge myself, and draw from different angles. If you cannot tell, the first and third panels are shots from the back. I chose this one because I wanted to capture my character and his sister sitting together while having the television screen in the background. The fourth panel was the hardest; I chose this angle because I wanted to give a different view to the reader, where you see the main character’s controller not plugged in. This format of a comic seems more complex than a triptych. This is because instead of one middle panel, there are two. I used one of the middle panels as additional context to the scene where I used the second one to set up the conflict. Having two middle panels allowed me to give more context to the audience without putting it in dialogue or a thinking bubble. I told this story because I was talking to my sister on the phone right before I made the comic. I liked playing single player games as a kid so I didn’t have many multiplayer ones. My sister, Summer, would always watch me, and we would talk about the game. Being the selfish boy that I was, I would play most of the time, but Summer would want to play about once a week.

Here is a link to the original assignment!